Hello! Its been a few weeks since we moved into our new house, and I’ve finally had some time to get sewing. I’ve been feeling a bit guilty about neglecting the blog, ridiculous as that sounds, but I think this is a good garment to get going again!  These photos are taken in my new sewing room (photos to come) against my lovely teal wall.

First things first, before I talk about the dress, check out my new hair cut! I’ve wanted an Emma Watson style pixie cut for years, and last week I finally did it. And I really like it, thankfully!

So, to the dress. Its another Grainline Alder dress, this time view A (the one without the butt ruffle). Because I am a sucker for punishment, I made up in a gorgeous black and white silk chiffon from the Fabric Store. I’ve had it sitting in my stash for a while, but I’ve been a bit wary of using it. There are so many horror stories out there about silk chiffon! Every time I picked it up I was put off by just how shifty it is. Its not slippery, as such, just really mobile. 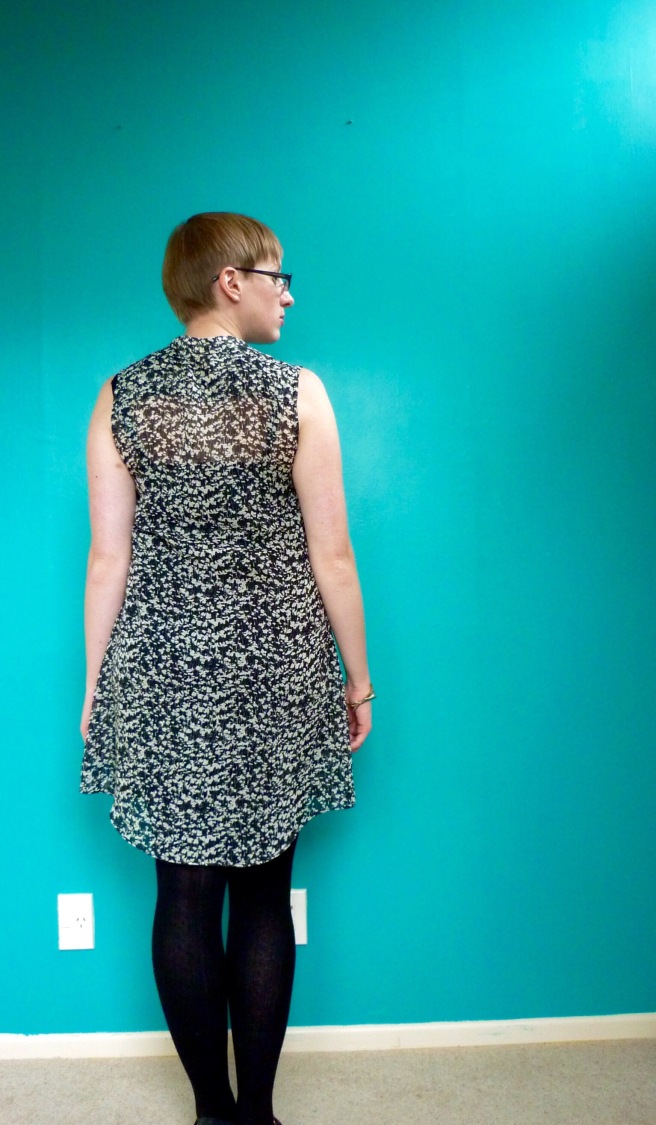 To tame the writhing, shifting m﻿ass of fabric, I starched the whole length of it before starting! It made the silk feel pretty gross, but that was a small price to pay for a nice crisp length of fabric which didn’t shift out from under my pattern pieces or twist and warp under my presser foot. And it washed out, so that was a relief! As I’ve made an Alder before I knew it would fit, so it was a fairly straightforward sew once I had the fabric sorted out (though the above photo makes me think I should have done a sway back adjustment. Must stop being so lazy)! I wanted a slightly dressier version, so I left off the collar, and didn’t topstitch the collar stand. I may have to go back and top stitch it down though, as the silk is a bit bubbly now that I’ve washed the starch out! 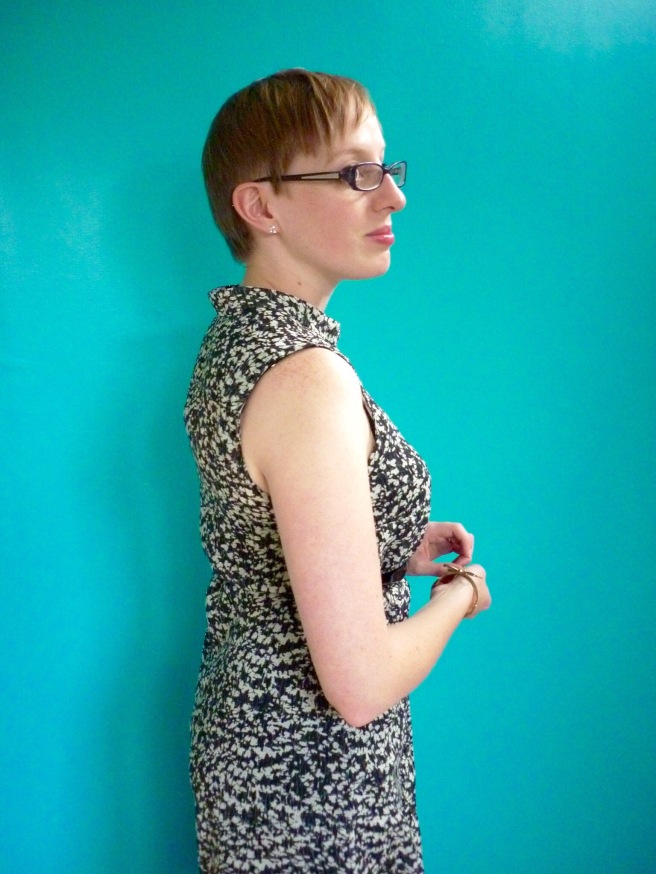 I think I should have used a ﻿slightly heavier interfacing, probably silk organza rather than the lightweight fusable I went with. Again, I was just being a bit lazy, but I regret it now! The button bands and the collar stand are a bit droopy. Lesson learned! The rest of the finishing on this dress is pretty good though, I slipstitched the collarstand facing and the armscye bindings down, the seams are all frenched and the hem is machine rolled. And I think I’m finally getting to grips with nice buttonholes, these ones are lovely and neat! I still need to get the manual out (thank you thank you Nana for keeping it!!) every time to remind me which order the levers get flipped, but thats ok.

I used smokey, sparkly buttons, just because. They’re incredibly hard to photograph! I like that they’re subtly blingy.

So thats my new dress! I can’t decide if I prefer it belted or unbelted. I might try it with a self fabric tie as well. I am going to need to try it with a different slip, as this one made everything super static-y and clingy!

Finally, a huge, spectacular, massive thank you to everyone who voted for my jammies in the Carolyn Pajama Party, because I won! I’m so excited and grateful to get such an amazing prize, it was an excelent way to start my weekend. And to make it even better it was a Wellington Sewing Bloggers Network clean sweep, with Sophie-Lee taking second place with her awesome dog print pair. Thank you all so much 🙂

31 thoughts on “Adventures with Silk Chiffon”