An actual shirt, with a collar stand and cuff plackets and button holes and everything! And even better, it fits! I’m really rather pleased with myself (can you tell?), and I’m even more pleased with this amazing pattern. It is, of course, the Grainline Archer.

Everything you’ve heard about this pattern is true, its awesome. I was fully expecting this to be a total disaster, so I bought some cheap poly cotton blend to have a practice. As I was cutting it out, all I could think was “gee, there are a lot of pieces in a shirt…this is going to be tricky.” And it was, its easily the most complicated thing I’ve ever sewn. But the sewalong on the Grainline Studio blog was brilliant, and I used this tutorial for the collar stand (the construction order just made better sense in my head, and I think it turned out really neatly), and after a weekend of careful sewing, I had a finished shirt! Out of everything I’ve ever made, this is the garment that makes me want to say to everyone “see this shirt? I totally made it.” Happily I’ve pretty much managed to squash that urge, I don’t want to be completely obnoxious! 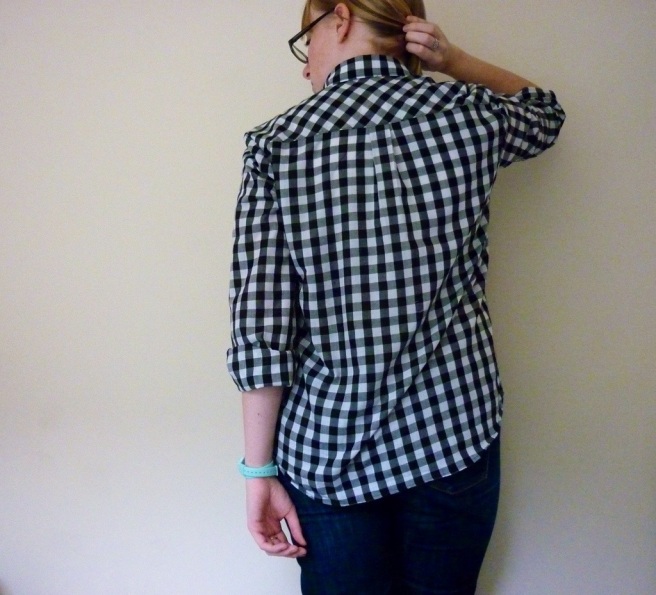 I cut the pockets, cuffs, outer yoke and button band on the bias, which looks good but definitely gave me a few headaches! Getting the button band and the pockets to stay square took a few attempts and all of my pins. The under yoke is cut on grain, as recommended in the sewalong, and it does feel a lot more sturdy than I think it would have if both were cut on the bias.

The only major stuff up I made was not reading the first page of the instructions very clearly (this is becoming a theme recently, must try harder…) and sewing the yoke and shoulders together with a 5/8″ seam allowance instead of a 1/2″ allawance. I didn’t pick this up until I came to sew on my collar stand, and it was about an inch too long! I trimmed it to fit, and then trimmed the collar down by the same amount so that it didn’t end up too 70’s. 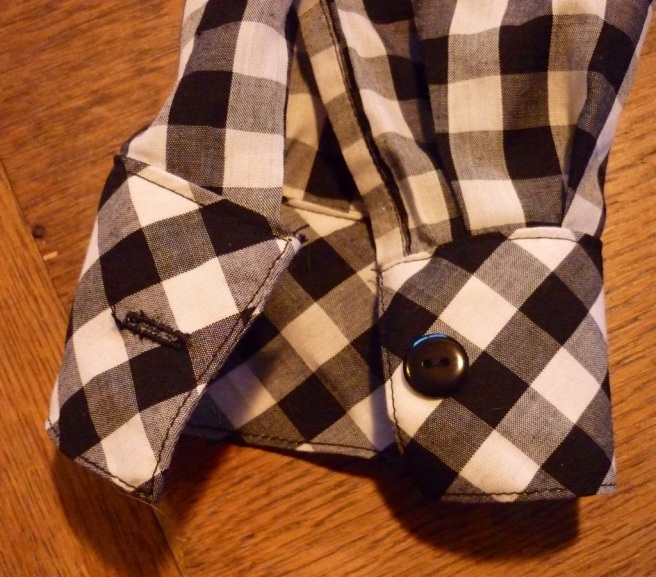 I think I may also have sewn the cuff plackets around the wrong way, I feel like it would make more sense for the buttonhole to be on the pleat side of the cuff, so its on the top when the cuff is buttoned. Not that it’ll matter on this shirt, I never wear shirts without the sleeves rolled up! The only other thing that I wish I had done is centring the plaid on the button band, and making sure that the plaid would be symmetrical either side of the band. But never mind, it hasn’t stopped me wearing it twice since Saturday! Mostly with a merino over the top, because its pretty damn chilly down this end of the globe at the moment!

I hope that those of you in the UK are enjoying your beautiful weather, my facebook feed is full of pictures of my friends over there enjoying the sunshine! I’m very jealous…

Oh my god, this top! I love Colette patterns, especially the Jasmine blouse, but wow this project gave me grief! I’m calling it the Gin and Tonic blouse, because it thats what the colours remind me of, and because I desperately needed a G&T at several points during its construction…

I think a big part of my problem was choosing the wrong fabric, cotton seersucker is maybe a bit too stiff for this bias cut blouse. I made this top mainly for Art Deco weekend, which is why I chose this fabric, but if i ever dare go near this pattern again I’ll choose a much softer fabric which will hang and drape nicely. I made the collar out of a scrap of cream silk that i had left over from a skirt I made for Art Deco weekend last year, which I plan to wear with this blouse this year. It should be a nice cool outfit to wear in the scorching Napier sun at least!

Things that I like about this top are the colours (even if the fabric choice was a mistake) and the chevrons that form where the stripes meet down the front and back. I’ve never made a bias cut garment before, so I’m pretty proud of how I got the stripes to match up so neatly! I just drew a line on the pattern which matched up with the top of a stripe on the fabric, which was easy and seems to have worked well!

I also like the notched sleeve cuffs. The instructions in the pattern looked quite intimidating, showing how to sew them together with the facings, but they were actually really simple once I had the pieces cut out in front of me.

The main thing I don’t like about this top is the fit. It’s just too big, and I don’t know how I managed to mess it up so badly! It should fit perfectly according to the measurements on the pattern. The darts are too low, and its too big across the back of my shoulders (the same old problem). I pulled it apart and tried to fix the back, but its still not right. I was so fixated on the back that I didn’t notice the darts until it was pretty much finished, and I couldn’t stand the idea of unpicking it again. I’m consoling myself with the thought that it’s for a costume, its not something I’ll be wearing every day, so it’ll do. I also had trouble with getting the collar and neck facing to sit, but once I pulled it apart and ripped the interfacing out it all smoothed out. The fabric is stable enough without the interfacing!