I’ll preface this post by saying that I really like the top I’ve made, the fabric just makes me think of clowns, with all those big orange spots! I called it a clown top on Instagram and had a few comments saying that it wasn’t clownish at all, but I wasn’t meaning it in a negative sense. Maybe my brain is a bit weird…

This is the top from M7483, a Nicole Miller pattern from one of their recent collections. I also like the wide legged trousers which come with the pattern, but to be honest I don”t really have a lot of places to wear elegant wide legged trousers! I can’t wait to get a job which requires nice clothes, I’ll have so many patterns stashed and waiting for an outing…

But though I won’t be making the trousers up just yet, I thought the top would be perfect for using up some short lengths of silk I have maturing in my stash. This particular length was a remnant I found at The Fabric Store, after brunch with some of the WSBN one day. I wasn’t supposed to be buying fabric, but I decided that remnants didn’t count! There was only 1.2m at 110cm wide, but I cut everything on a single layer and there was plenty of fabric. It’s a silk crepe, so was really easy to cut, but I have to say it gave me a headache trying to get my pattern lined up on it! I found it really hard to get the fabric on grain after washing, and being a crepe I couldn’t pull a thread or anything to help me square it up. The spots didn’t help, there were no obvious horizontal lines in the pattern! I think I managed on in the end though (and I avoided any unfortunate spot placement, thank god). I almost cut into it with the pattern up the other way, until I realised just in the nick of time that they were practically Mickey Mouse heads up that way!

The pattern calls for a separating zipper up the back, but I decided to sew most of the way up the CB and then leave a keyhole with a self fabric covered button and loop so that I could get my head through the boat neckline. My pattern matching isn’t quite perfect, but I’m pretty happy with it anyway!

I really like the length of the sleeves, I think they make it slightly dressier than if they were a standard short sleeve. I’m also pretty happy with the fit, though there are some things I’ll do differently next time. It’s definitely too long along the shoulder seam, the sleeve cap is hanging off the point of my shoulder, so I’ll do a narrow shoulder adjustment next time. I think I’ll also grade out to the next size up from below the bust dart to the hem, as it’s a bit snug around my hips and it tends to get caught on my belt/the waistband of my jeans. I think if I had a little bit more room there that it would sit better and I wouldn’t get that bubble at the small of my back. 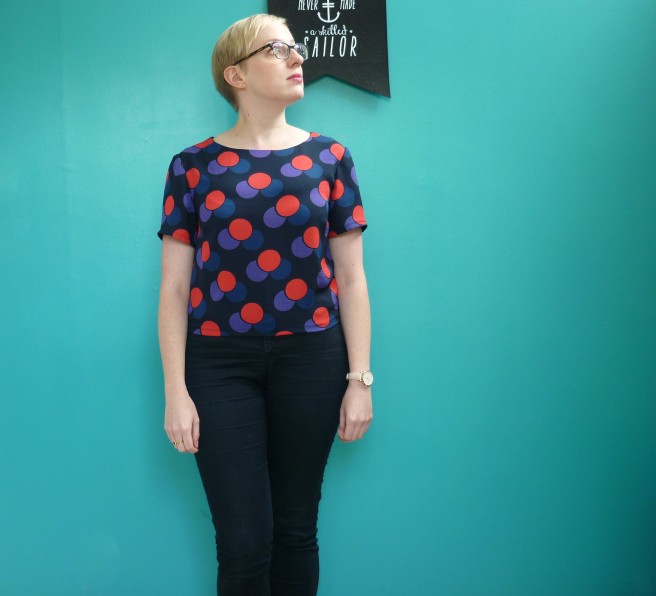 I’m looking forward to cranking a few more of these out, I thin it’ll be cute with high-waisted shorts or a narrow skirt in the warmer weather. I also have a length of silk velvet (also a remnant, I love rummaging through those bins…) which I think would work perfectly as this top! I might even look for a metal toothed separating zipper to put up the back…

Hello! Its been a few weeks since we moved into our new house, and I’ve finally had some time to get sewing. I’ve been feeling a bit guilty about neglecting the blog, ridiculous as that sounds, but I think this is a good garment to get going again!  These photos are taken in my new sewing room (photos to come) against my lovely teal wall.

First things first, before I talk about the dress, check out my new hair cut! I’ve wanted an Emma Watson style pixie cut for years, and last week I finally did it. And I really like it, thankfully!

So, to the dress. Its another Grainline Alder dress, this time view A (the one without the butt ruffle). Because I am a sucker for punishment, I made up in a gorgeous black and white silk chiffon from the Fabric Store. I’ve had it sitting in my stash for a while, but I’ve been a bit wary of using it. There are so many horror stories out there about silk chiffon! Every time I picked it up I was put off by just how shifty it is. Its not slippery, as such, just really mobile.

To tame the writhing, shifting m﻿ass of fabric, I starched the whole length of it before starting! It made the silk feel pretty gross, but that was a small price to pay for a nice crisp length of fabric which didn’t shift out from under my pattern pieces or twist and warp under my presser foot. And it washed out, so that was a relief! As I’ve made an Alder before I knew it would fit, so it was a fairly straightforward sew once I had the fabric sorted out (though the above photo makes me think I should have done a sway back adjustment. Must stop being so lazy)! I wanted a slightly dressier version, so I left off the collar, and didn’t topstitch the collar stand. I may have to go back and top stitch it down though, as the silk is a bit bubbly now that I’ve washed the starch out!

I think I should have used a ﻿slightly heavier interfacing, probably silk organza rather than the lightweight fusable I went with. Again, I was just being a bit lazy, but I regret it now! The button bands and the collar stand are a bit droopy. Lesson learned! The rest of the finishing on this dress is pretty good though, I slipstitched the collarstand facing and the armscye bindings down, the seams are all frenched and the hem is machine rolled. And I think I’m finally getting to grips with nice buttonholes, these ones are lovely and neat! I still need to get the manual out (thank you thank you Nana for keeping it!!) every time to remind me which order the levers get flipped, but thats ok. 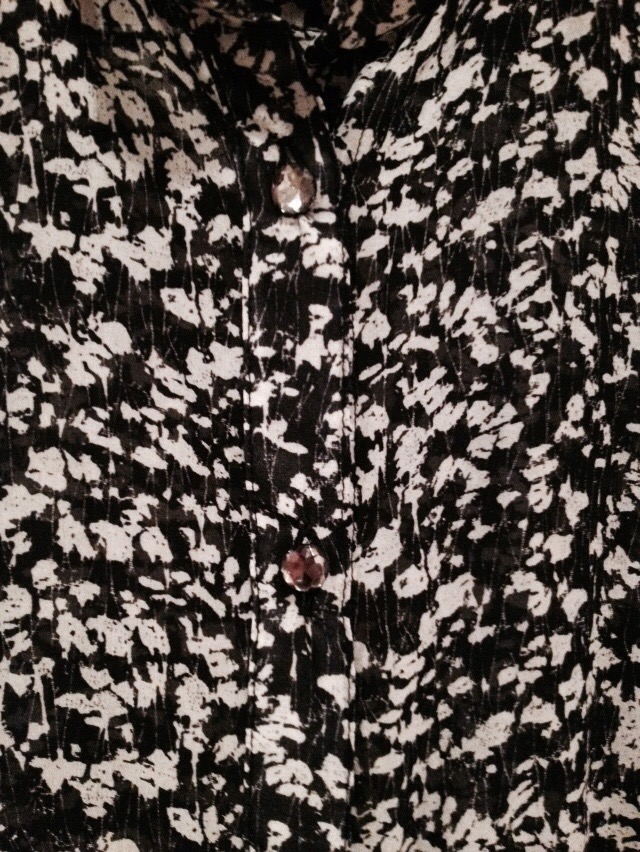 I used smokey, sparkly buttons, just because. They’re incredibly hard to photograph! I like that they’re subtly blingy. 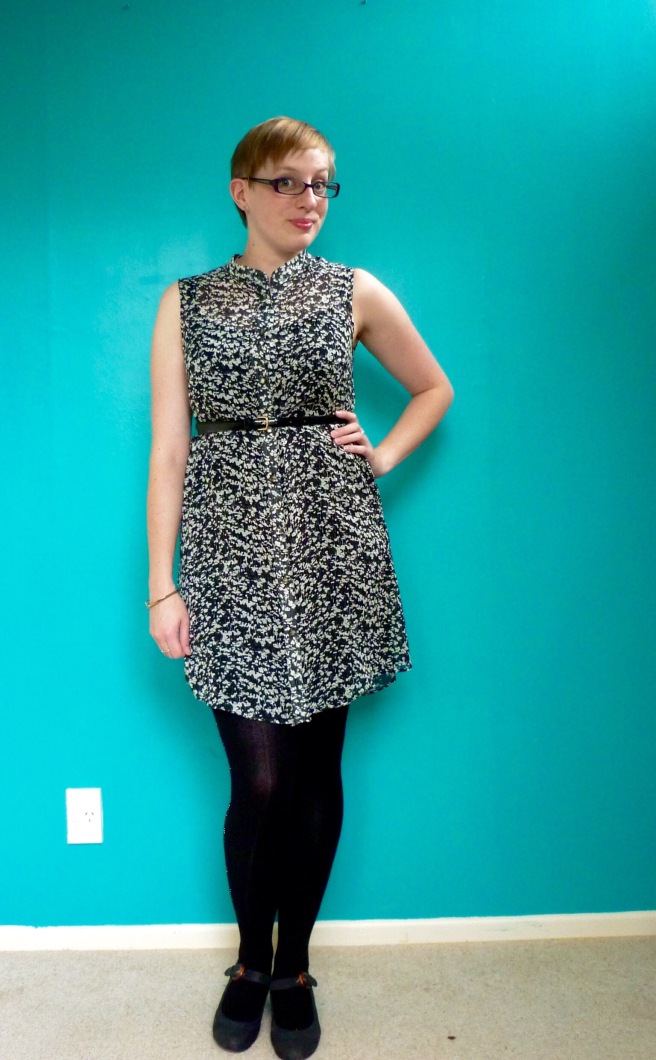 So thats my new dress! I can’t decide if I prefer it belted or unbelted. I might try it with a self fabric tie as well. I am going to need to try it with a different slip, as this one made everything super static-y and clingy!

Finally, a huge, spectacular, massive thank you to everyone who voted for my jammies in the Carolyn Pajama Party, because I won! I’m so excited and grateful to get such an amazing prize, it was an excelent way to start my weekend. And to make it even better it was a Wellington Sewing Bloggers Network clean sweep, with Sophie-Lee taking second place with her awesome dog print pair. Thank you all so much 🙂

Another week, another tee shirt! Though this one is more of a blouse, I suppose… 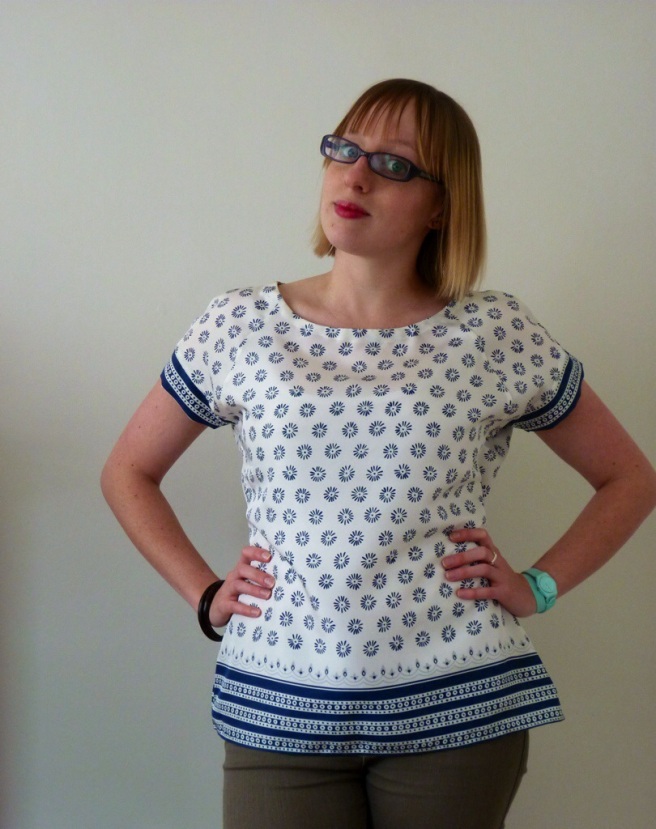 Its a Sewaholic Belcarra, to be exact! I’ve been eyeing this pattern since it was released, but was a bit unsure about the style on me. But then Sewaholic had a 20% off sale, so I grabbed the PDF and headed to The Fabric Store for a wee look around. I was originally after a soft, drapey (thanks to everyone who offered opinions about the correct way to spell drapey, by the way!) fabric, preferably self patterned and white. I also wanted something easy to look after, cotton or a poly blend. Instead, I ended up with this pretty silk border print. Its soft and mostly white, but thats about all it has in common with my original list of requiments! I thought it was too pretty to pass up on though, so I bought two panels in the hope that I could squeeze my pattern onto it.

(I tried really hard to get a shot of the back, but this was as much of me as I managed to fit in the frame for some reason. After 5 similar shots, I gave up…)

The blouse was really easy to make up, I just made the plain version without the pintucks or pocket. It would have gone together in a few hours, except it was a nightmare to cut out! This is the first think I’ve made in a slippery silk, and I thought it would be ok as it was quite crisp feeling, but it still slipped and slithered and warped and just generally gave me hives as I was trying to lay out the pattern! I ended up weighing the pattern down as I usually do, then pinning it as well. I originally planned to cut it in a single layer, to minimise my fabric use, but this ended up helping me to keep everything square as well. It was with great relief that I cut out the final cuff band!

After that nightmare, I waited a few days to start sewing it together. I decided I would try to use french seams, since they always look so lovely, so it took a bit of number crunching to figure out how I should divide up my seam allowances! I’m rubbish at fractions, using imperial measurements makes my head hurt. Eventually I figured out that 1/4″ and 3/8″ made up 5/8″, so thats what I went with. Later I found the tutorial on The Grainline blog which spelt all of that out, so It was good to have my numbers confirmed! Then there was getting the general orientation of the pattern pieces right, wrong sides together first, then right sides…the only time I got it wrong was sewing up the shoulder seams, so at least they were only short lengths of stitching to unpick! I make it sound really difficult, but once I got my head around it it was all fine, and it looks lovely on the inside!

I also had a minor wrestle with the neck band, for some reason it ended up about an inch longer than the neckline. i think I must have stretched out the bias strip as I basted it together. In the end, I just trimmed it down and re-stitched it. I also decided to hand stitch the binding down, rather than top stitch it, which I think looks better on the silk.

I made two very minor changes to the instructions, otherwise its exactly as the pattern intended! I cut the cuff bands on grain instead of in the bias, as I wanted to use the border print, and I used a narrow rolled hem instead of folding and topstitching it up. 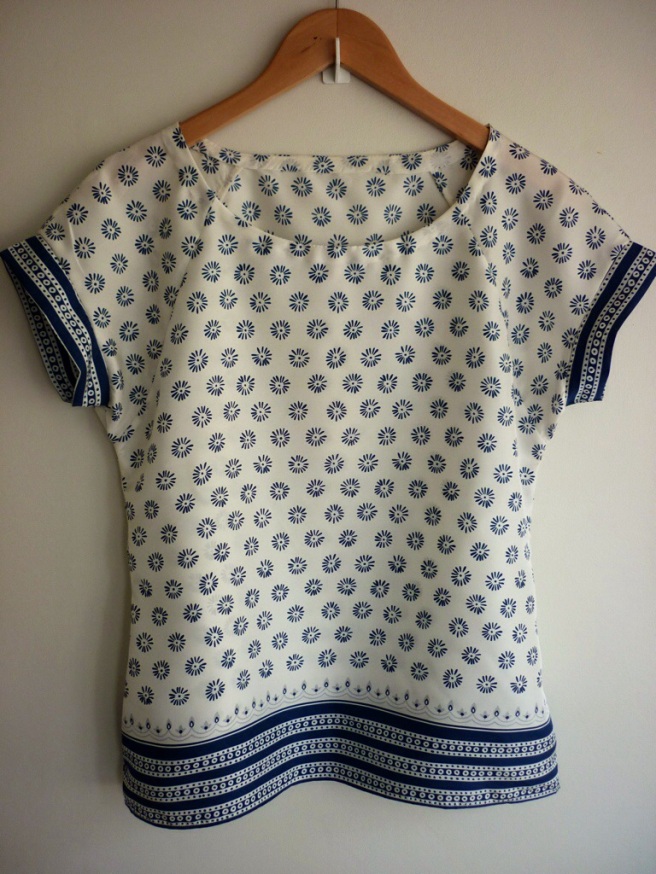 I really like the pattern, but I am slightly worried that this fabric (pretty as it is) makes it a bit…mature for me. I’m considering giving it to my mum, as it might be more age appropriate for her! What do you think? Or do you think it’ll look ok with shorts and sandals and bright jewellery for summer?