Is anyone else struggling to get their head around the fact that it’s November? I’m not ready for there to be Christmas displays in the shops! This year just seems to have disappeared, I’m not sure what I’ve done with it. I mean, I did hand in my research project last week, which means that I’ve finally finished my Masters of Information Studies (provided I pass, of course, though I would be a bit salty if my supervisor had let me hand in something below a pass level!). I don’t think I realised how much space it had been occupying in my mind this year until it was all handed in and no longer in my control, and I’ve been enjoying daydreaming about all of my summer sewing plans rather than musing about my data matrix or something equally dull.

This dress is one which I sewed up in tiny chunks in between writing up my results and discussion sections. It’s the Fiona Sundress from Closet Case Patterns, and it was a good one to sew in drips and drabs! I could sew the front princess seams, then write a couple of paragraphs, then sew the back princess seams, then draw up some figures and charts, then sew the side seams…you get the picture! 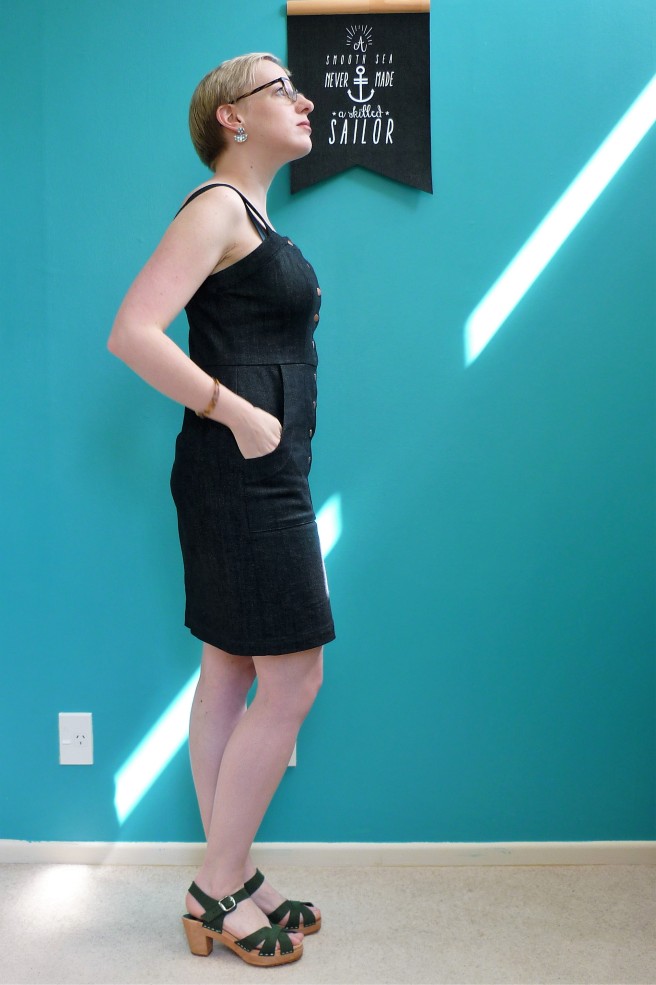 I really loved the 90’s style of the longer version, and I loved the drama of the low backed version, but I decided to be very sensible and make up the mini-length with the high back! I just really hate not wearing a bra, and I wanted to be able to wear it without a tee shirt underneath when we get further into the summer. I do wish I had made the below-knee version rather than the mini length, but I think this length will be good with tights when I’m layering it for cooler weather too. 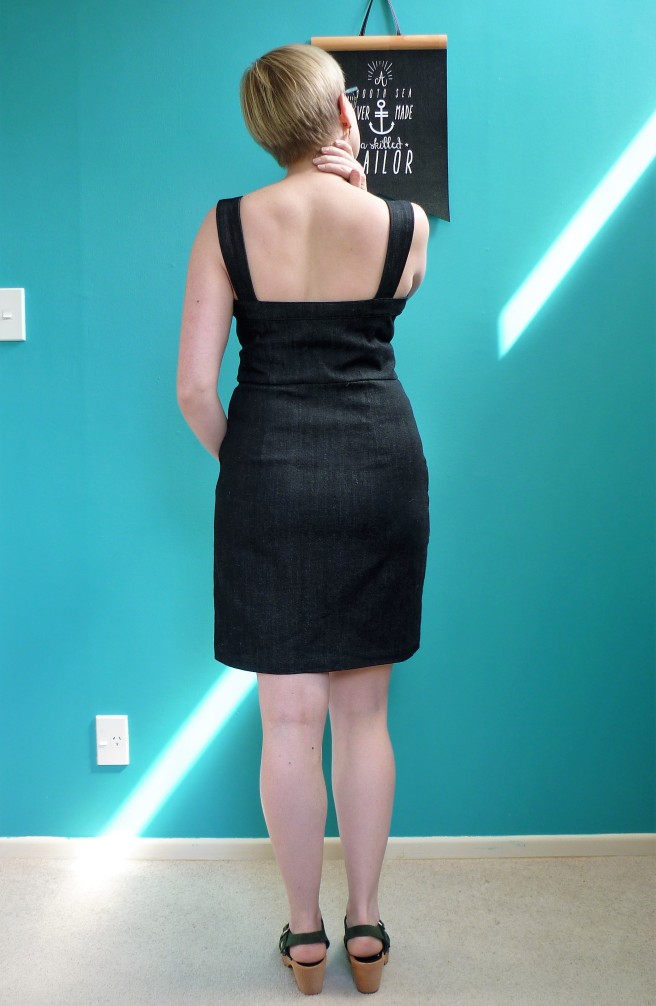 Fiona was a fun wee pattern to sew up, and came together with minimal fuss or changes! I took a centimeter off the bottom of the bodice to account for my short waist, and possibly could have taken a sliver more off at the centre back for my sway back, but I’m not too bothered. I did have to shorten the straps considerably, but that’s easy enough! The instructions even remind you to wait until you get to the point you can try the dress on before securing the straps at the back, in case they need to be altered. I do wonder if I should have taken it in a bit through the bodice, there’s a bit of extra ease under my arms and around my waist, but I really didn’t want a tight dress so I’m not overly bothered! 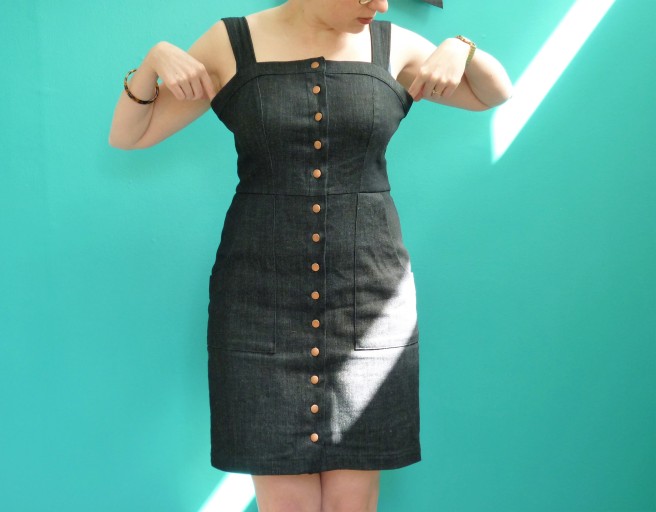 I used a lovely stretch denim from The Fabric Store, it was marked as Marc Jacobs and was on special for something crazy cheap so I bought a bit of it! I’ve got enough for another pair of Ginger Jeans, which is timely as my first blue pair are getting pretty ratty now. I think denim works really well for this pattern, especially for the shorter versions, but I wish I had used a lighter fabric for the strap and top band facings. I cottoned on in time to use a chambray for the pocket facings, and I think it would have worked better to reduce the bulk at the top of the button bank especially. Having a rigid fabric facing at the top there might also have helped to combat the slight gape I get under my arms too (seriously exaggerated in the above photo!).

All those lovely copper buttons came from Miss Maude Fabrics, and yes, making 14 buttonholes and whacking in 14 buttons was a bit of a chore! Honestly, getting in and out of this dress is a bit of a chore too, even though I only have to undo the top 6 buttons. If I was going to make it again, especially in a lighter fabric like linen, I think I would stick a long invisible zip in the side seam, just to make it easier to get in and out of! I would probably still make the buttonholes, but at least it would make getting dressed in the dark at 6am before work easier.

I am really happy with it though, I’m looking forward to getting to wear it with bare shoulders and sandals like this! It looks cute over my striped tee shirts too though, so I’ll be able to wear it no matter what Wellington decided to do with the weather…