It’s so hot. So muggy. So unlike Wellington. We’re all wandering around in a sticky, grouchy, slightly stunned sort of way, totally not used to weather like this (we’d move to Auckland if we wanted humidity!). Obviously this is the perfect weather for a Closet Case Patterns Charlie Caftan in crisp linen from The Fabric Store.

I picked up this 1.5m remnant of linen last time I was at TFS (I can never help myself, their remnant bins are so good), and decided I would use it to make a test run of the Charlie before I used the gorgeous piece of Japanese double gauze which I bought specifically to make view B of the pattern. I opted for view A for this linen, as I thought the architectural pleats would work better with it’s crisp hand than the gathers. 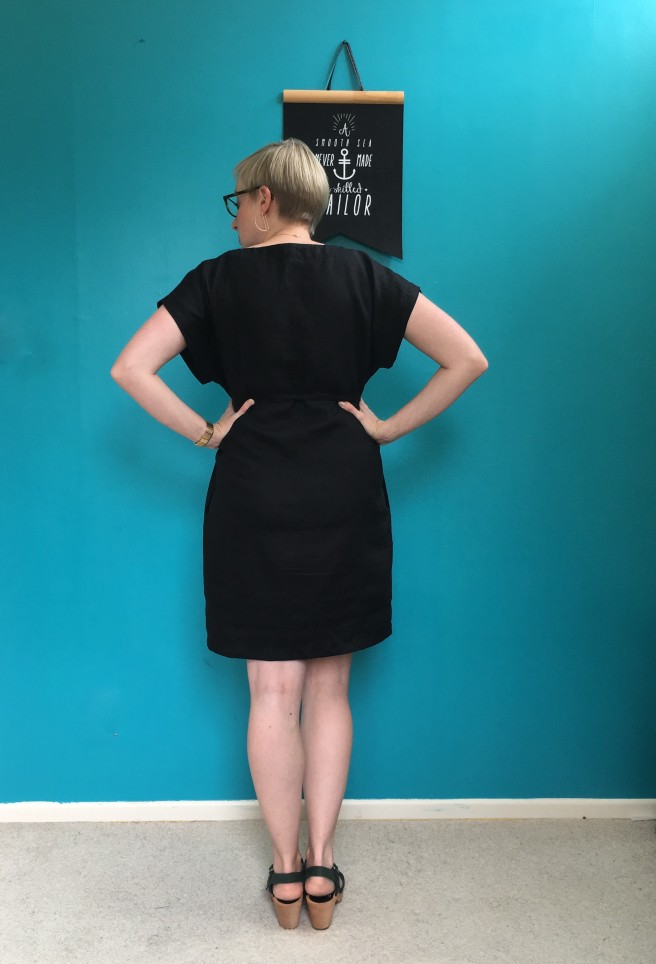 Charlie was an enjoyable dress to sew! I love the kimono sleeves, and the faced neckline. The waistband insert was enjoyably fiddly to sew, I think sometimes I sew too many basic-straight-line garments so I should push myself more. I used the higher armholes, though you can still see my bra through them. I’ll just make sure I’m wearing a black bra with it, I’m not overly bothered! I also added the waist ties from view B, which I’m glad about. The dress itself is pretty straight up and down, and I like the hint of shape that the ties give. I also like that they’re long enough to tie in the front, the linen ties into a lovely crisp bow which I think looks really cute with the insert and the pleats.

I’ve been playing around with different ways to tie it, I quite like it tied together in a bow at the front without wrapping around my waist. It gives the dress a little bit more shape than not being tied up at all, but is more cocoon shaped (which is great in this heat!). I don’t think I’ll ever wear it untied, simply because I don’t know what I’d do with the ties! Maybe when I make my double gauze version I’ll make the ties separate, or figure out a way to make them removable.

I’m really liking deep V necklines at the moment, surprisingly enough! I’ve always preferred a scoop neck, but I’ve sewn a couple of things with this shape neckline lately and I think its really pretty. Good for showing off some of my shorter necklaces too!

The only issue I have with this one is that it’s a touch snug at around my hips, but luckily linen is pretty forgiving and it’s already relaxed and become more comfortable! I could have let the seams out a touch, but then I would have had to mess with the pockets, and I was too lazy. it isn’t that bad, I’ll just need to remember for next time!

Linen is having a definite moment in my summer sewing, I’ve made 3 garments in it so far with two more in the pipeline. I could have more, but I’ve put a few restrictions of my fabric buying for the next wee while, and I don’t have any more in my stash! I’m going to try to sew 3 pieces of fabric from my stash before I’m allowed to add a metre, so we’ll see how that goes. If I start counting from the beginning of my christmas break, that gives me 1.5m of new fabric owing…I’ll just avoid the Fabric Store for a little while!

12 thoughts on “All the linen over here please!”