Happy Easter/ long weekend everyone! We made our annual trip out to the boonies to spend the long weekend dancing Balboa and eating excelent food in a rural lodge overlooking the sea, which is always a nice relaxing time. It’s also a gorgeous environment to take photos (away from the teal wall), so I took advantage of the scenery and of my friend Lauren’s willingness to be photographer to get some pictures of my recently finished Bronwyn Pullover. 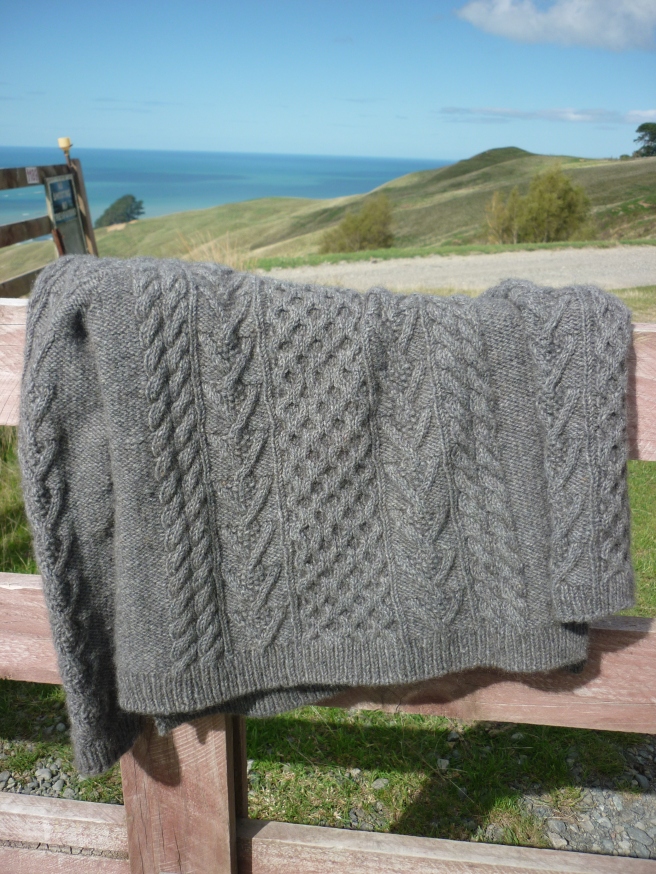 I loved this pattern as soon as I saw it on the Brooklyn Tweed Instagram page! It’s by Melissa Wehrle, and was released in May last year as part of the BT Wool People 10 collection. I had been planning to knit another cabled Brooklyn Tweed pattern as part of my #makenine2016 plans, but I switched patterns once I saw this one. Ravelry says I started knitting this in July last year, so I was apparently a bit ambitious thinking I would have it done by the end of the year… To be honest I could have knitted it faster, but I got distracted by a couple of other projects and then the idea of knitting it over summer wasn’t so appealing, so it’s taken me about 7 months to complete! 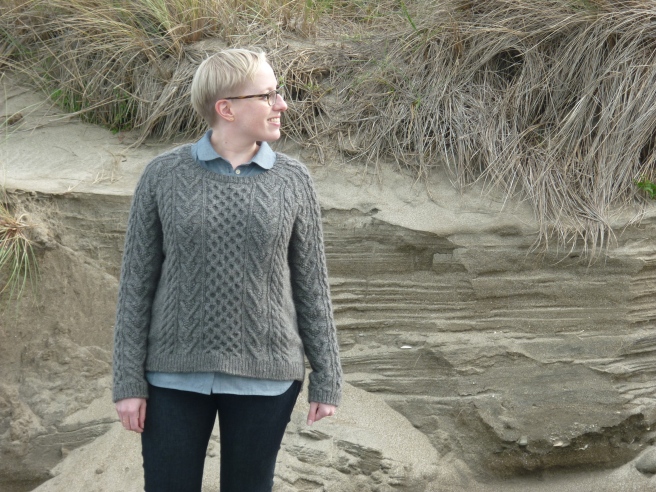 The wool is Zealana Heron, a 10 ply merino/possum blend. This is actually the second thing I’ve knitted in Heron (the first has been finished for over a year, but only got photos last weekend, whoops), and it is so lovely. The yarn is almost felted together, so it just looks like a single fuzzy, lofty strand rather than two or three strands twisted together. I’m sure there’s a technical term for that, but hopefully you know what I mean! The 20% brushtail possum fur gives the jumper a lovely soft halo, and makes it super warm. As well as feeling amazing, I also just like the idea of wearing something knitted out of NZ wool and which directly aides in the conservation of New Zealand native bush by using possum. I know possums are considered cute fluffy little critters in a lot of the world (Australia, looking at you), but they’re a conservation disaster in New Zealand. They eat the eggs of our native birds (which need all the help they can get, given that a lot of them can’t fly and so nest on the ground), and are massively destructive to our native flora as well. So there are plenty of reasons for me to keep knitting with Zealana Yarns! 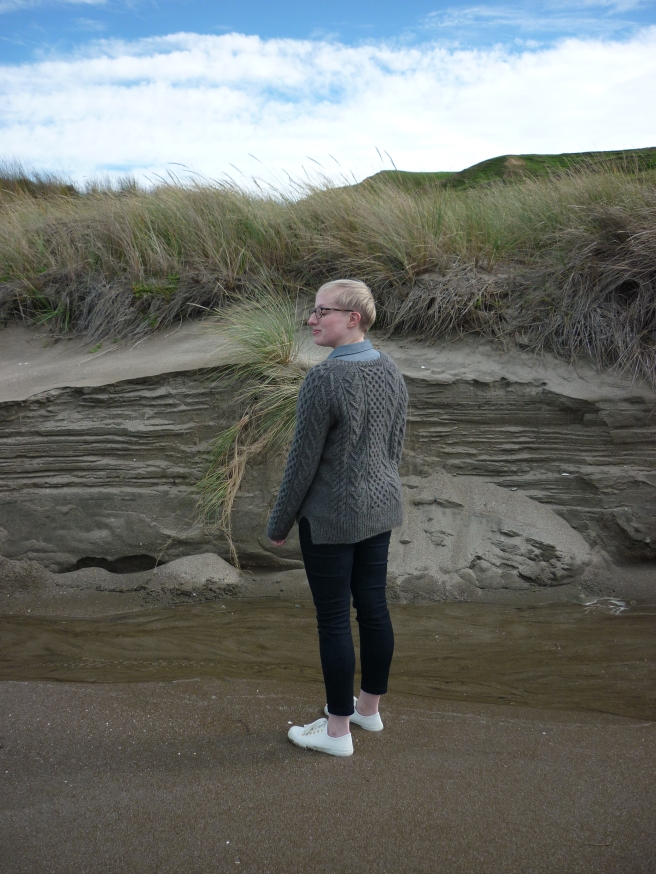 I’m looking a bit awkward in these pictures, there were about 12 people watching! I’m not a natural in front of the camera, let alone in front of an audience. The jumper looks good though, so just focus on that…

This pattern has you knit the jumper in several stages. The front and back hem ribbing sections are knit separately, then are joined in the round and the body is knitted up to the armpits, where the front stitches are put on hold while the back is shaped for raglan sleeves, then the front is picked up and finished in the same way. 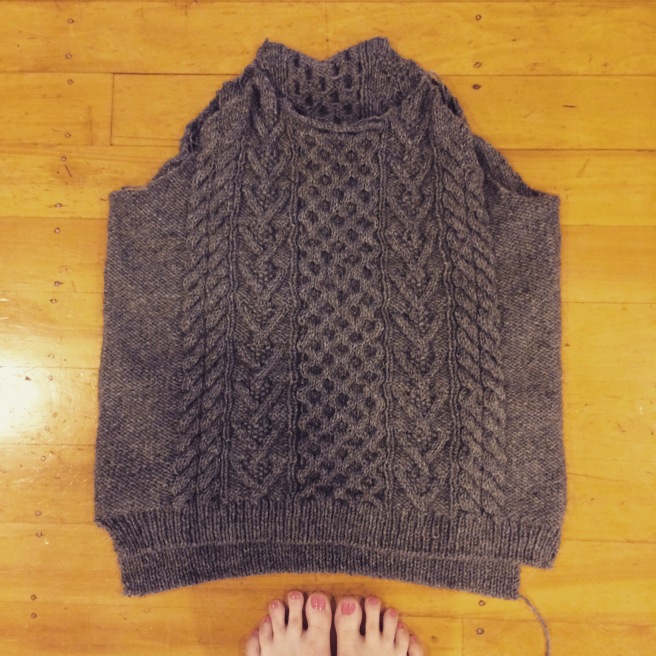 Both sleeves are knitted the same from the cuff up in the round, until the raglan sleeve cap, which is different on each sleeve of course. Then the whole lot is seamed together, and the neckband is picked up and knitted. I like knitting in the round, but I also like that the sleeves were knitted separately, as there is a lot of jumper to cart around by that point! This method kept things manageable, but also minimised the seaming (which I’m a fan of!). 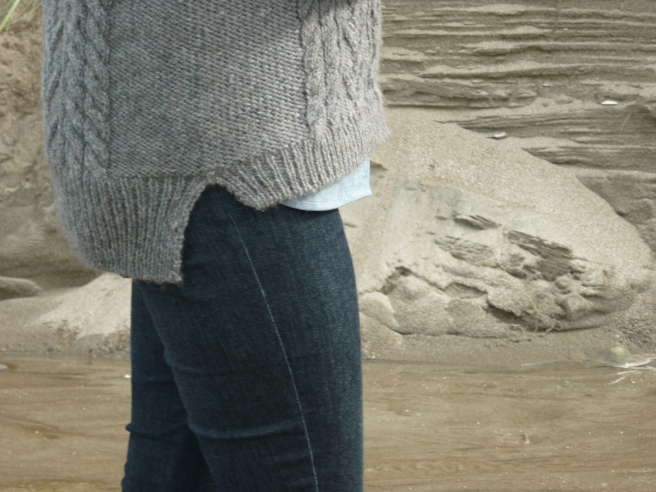 This was a really fun project to work on, once I got going. The cables were easy enough to keep track of after a few repititions, and there was enough variety to keep it interesting to knit! I used to hate doing a tubular cast on, even though I love the result, because it’s so fiddly and always seems like it’s going to collapse when I take out the waste yarn (I’m still not too sure why it doesn’t, must be witchcraft), but after doing a tubular cast on for the front and back and both sleeves, I might have got over my dislike. I do really love the split high/low hem, it’s such a nice touch. In fact, I enjoyed all of this jumper, except for the Kitchener stitch bind off for the neckband! I don’t think I’ll ever get over my dislike of Kitchener stitch, I just can’t get my head around the pattern of knit/purl/slip movements to make with the tapestry needle, I’m constantly referring to the tutorial on The Purl Bee. It’s bearable when it’s 12 stitches for the toe of a sock, but the 114 stitches around this neckband were a mission. I couldn’t bear to have the neckband not to match the cast on edges though, so I just sucked it up and did it!

I think this will be my last jumper for a little while, for this winter at least! I’ve got five hand knit jumpers in rotation now, so I’m going to try to focus more on accessories for the rest of the year. I’ve already finished a hat, and I have a scarf cast on, as well as a few pairs of socks planned. That should keep me busy for a wee bit… 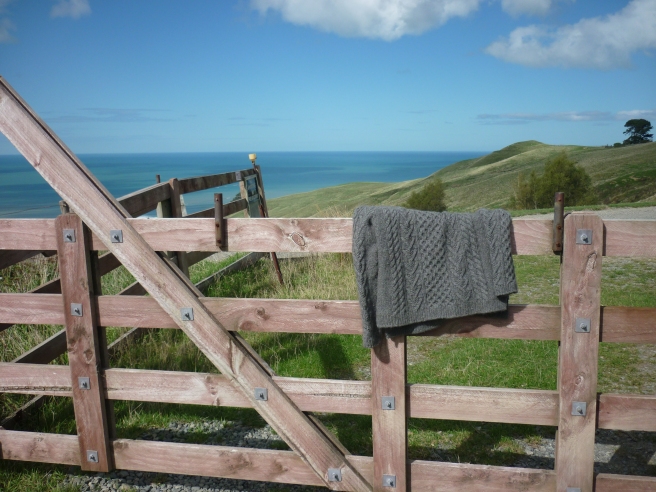 26 thoughts on “My Bronwyn Pullover (or, how I knit all the cables ever.)”